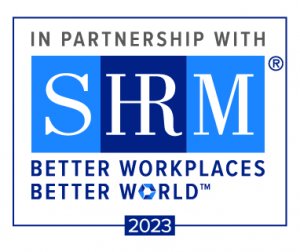 Ready to reach the NEXT LEVEL in your HR career?

Prepare for your SHRM-CP/SHRM-SCP with our nine-week virtual instructor-led course. 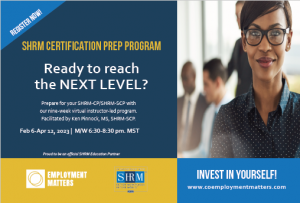 “I really benefited from Ken’s class. He is knowledgeable, informative, and responsive. In addition to the course content, he offered additional resources and meetings to prepare for the test. His teaching style is compassionate and engaging, and I am not sure I would have passed the certification without his help. I would definitely take another class from him!”

Employment Matters’ newest team looks forward to collaborating with you. 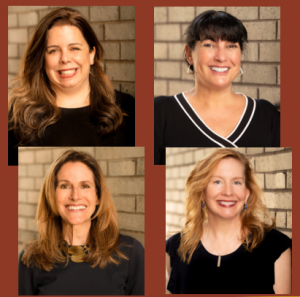 On August 29, 2016, after a nearly nine-month period of stakeholder feedback, the EEOC released its new Enforcement Guideline on Retaliation and Related Issues, which supersedes its 1998 Compliance Manual Section 8: Retaliation. The new Guidance is a response to numerous court rulings and a significant increase in the number of retaliation claims, which now constitute the most frequently alleged basis of discrimination.

All federal Equal Employment Opportunity (EEO) laws, comprised of Title VII, the Age Discrimination in Employment Act (ADEA), the Americans with Disabilities Act (ADA), the Rehabilitation Act, the Equal Pay Act (EPA), and the Genetic Information Nondiscrimination Act (GINA), prohibit retaliation arising from the exercise of one’s rights under those laws. Specifically, an employer cannot punish a person (or even a friend or family member of that person) because he or she files an EEO complaint, serves as a witness in an EEO investigation, opposes conduct by the employer that allegedly violates any EEO law, or participates in any other way in an EEO matter. The word “person” is used in this context rather than “employee” because even non-employees, such as job applicants, are protected from retaliation.

An individual engages in “opposition” when he or she opposes “any practice made unlawful under the employment discrimination statutes.” An individual need not be involved in any formal EEOC proceeding or even an employer’s complaint process to invoke the opposition clause. All that is necessary is that “an individual explicitly or implicitly communicates his or her belief that the matter complained of is, or could become, harassment or other discrimination.” Examples of opposition include filing a formal complaint of discrimination or harassment with Human Resources, making a comment during a meeting, and even communicating a concern to a coworker in an informal setting. The Guidance goes on to explain that “the same conduct may qualify for protection as both ‘participation’ and ‘opposition.’ However, the opposition clause protects a broader range of conduct than the participation clause.”

The distinction between participation and opposition is important because the protections afforded by the two clauses are not identical. The EEOC’s position is that participation is absolutely protected “whether or not the EEO allegation is based on a reasonable, good faith belief that a violation occurred.” That means an employer cannot take any adverse action against an individual who participates in any way in an EEOC investigation, proceeding, or hearing, even if that person knowingly, maliciously, or in bad faith fabricates a demonstrably false claim of discrimination or harassment or provides untruthful information. The prohibition even protects employees who in bad faith cover up discrimination during an investigation or proceeding.

An employer’s action is “materially adverse” when it might deter a reasonable person from engaging in protected activity. Note that the employer’s action does not have to actually deter someone from engaging in protected activity to be considered materially adverse. At the same time, it is not enough to show that just anyone would be deterred by the employer’s action. Instead, the Guidance imposes a reasonable person standard. Nearly any action by an employer can be considered materially adverse depending on the circumstances, from more common examples such as denial of promotion or disciplinary action, to more obscure examples such as changing an employee’s schedule or refusing to investigate a threat against an employee. The Guidance goes on to say: “A materially adverse action may also be an action that has no tangible effect on employment, or even an action that takes place exclusively outside of work, as long as it might well dissuade a reasonable person from engaging in protected activity.” On the other hand, employer conduct that amounts to no more than “a petty slight, minor annoyance, [or] trivial punishment” does not constitute a materially adverse action.

Direct evidence of retaliatory intent, though powerful, is rarely available. Instead, most claimants rely on indirect evidence to infer retaliatory intent. Common examples include suspiciously close timing between the protected activity and the materially adverse action, demonstrated falsity of the employer’s purported reasons for the action, inconsistent or shifting explanations by the employer, or demonstrating that other similarly situated employees who did not engage in protected activity were treated favorably in comparison. This does not mean that employees who engage in protected activity cannot be held accountable for substandard performance or misconduct or that they are immune from reductions in force, downsizing, or other employer actions that affect the larger workforce.

However, employers should recognize that doing so is likely to prompt a claim of retaliation regardless of its validity. Any employer that fails to carefully document and justify the reasons for any such action is inviting an unfavorable outcome. Moreover, there is no magical amount of time after an employee engages in protected activity when it becomes “safe” to initiate action affecting that employee. A causal connection could be deemed by a court not to exist even when the adverse action occurs immediately after the protected activity because of other persuasive factors, such as documented misconduct or poor performance. The same court could deem a causal connection to exist when the adverse action occurs long after the protected activity where the employer fails to demonstrate the existence of a non-retaliatory reason for the action.

A word of caution is prudent here because there is no simple template that can be applied in every scenario to determine what is materially adverse, as opposed to what is petty or trivial. Instead, the facts and circumstances of each situation must be determined on an individual basis. As with any issue with legal implications, an employer should craft its policies toward preventing claims of retaliation in the first place, not simply trying to prevail in the event of future litigation. Taking care to avoid even an appearance of retaliation is therefore advisable. Even the lawsuits that employers win are incredibly expensive and disruptive, so leave the legal hair splitting and theoretical arguments to someone else. After all, does it really matter if you get vindicated by a jury after years of litigation and legal fees running into the hundreds of thousands of dollars, not to mention the damage to the organization’s reputation that will inevitably result from the public airing of employees’ grievances?

The Guidance provides employers with “promising practices” for minimizing the likelihood of retaliation violations. The list of practices begins with a written policy that clearly prohibits retaliation, provides examples of conduct that violate the policy, explains practical guidance for interaction between managers and employees, and establishes a reporting mechanism for employees who believe they have been the victims of retaliation. Other recommended practices include training for all employees about the existence and meaning of the written policy, a firm message from the top of the organization that retaliation will not be tolerated, supporting employees who report retaliation (including a prompt, thorough, and objective investigation of those complaints), and proactively following up with employees and managers regarding the resolution of complaints. It is not enough for an employer to simply brush off a complaint of retaliation because it thinks the complaint is invalid. Failing to conduct an investigation exposes an employer to significant risk not just in the context of that single complaint, but also any future complaints that might arise.

The entire Guidance, with cites to specific case law and other sources, can be found on the EEOC’s web site. The EEOC also offers a Questions and Answers page that summarizes the most significant aspects of the Guidance and provides references for additional assistance. 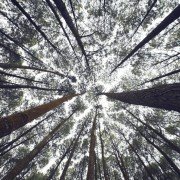 The Association of Workplace Investigators gathers dedicated, experienced workplace investigators to enhance individual skills and the profession. The Denver Local Circle meeting of AWI is scheduled for Thursday, April 6, 2017, from 8:30 to 10:oo am at the University of Denver. This meeting’s discussion will focus on challenges and solutions for internal investigators and those  responsible for directing internal corporate investigations. This meeting will offer substantive discussion assisted by experienced investigators from top Denver corporations, as well as an introduction to AWI and attention to AWI’s Guiding Principles publication. Come with your questions big and small and get to know others who share your challenges and dedication to continuous improvement in the workplace investigations profession.

To register to attend, please email Mark Flynn at mflynn@emfig.com (ideally, before Monday, April 3rd) and include names, email addresses, and organization for attendees.